The Blair Witch – A sequel or a remake?

As a big fan of the original film, I naturally anticipated this sequel to be a continuation of thrills on par with the first film. However, 10 minutes into Blair Witch, I realized my enthusiasm was merely the nostalgia I had from the first film.

When The Blair Witch Project was released in 1999, the found-footage movie wasn’t yet a sub-genre. In fact, it can be said that the film invented this particular sub-genre of horror. The style made it feel like it was really happening and left me scared sh***less. The shakey-cam offered a realism that the polished look of it’s contemporaries couldn’t match. Unfortunately, I felt the exact opposite with this sequel. The whole “real feel” movie has been done to death and it’s just not scary anymore.

Blair Witch tries very hard to give as many scares as possible. But it tries too hard. For those of you who have never seen the first movie, (spoiler alert) a trio of teenagers drive to Burkittsville, MD to do a documentary about the legend of the Blair witch. There they become lost in the woods where the witch resides and meet their untimely demise at her invisible hands.

The sequel is the exact same movie with two minor differences. This time they go into the woods because the protagonist thinks he sees his sister in some found Blair Witch footage. And there are four of them instead of three. That’s about it. All of the story beats are identical to the first film which left the plot terribly predictable and there were so many jump scares I lost count. All style and no substance. The actors do what they can but are left in the hands of a copycat storyline with only gimmicks to hook the audience. 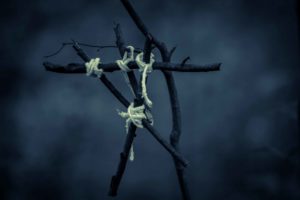 Story over Style: There’s an idea

Call me old fashioned, but I’m more terrified when a story leads my imagination without spoon-feeding it with jump scares and overdone stylization. The first Blair Witch accomplished this with success. Although the style was novel, the story was good and you cared about the characters. It would have worked no matter how the film looked. In the tradition of Edgar Allan Poe, the suspense kept you in the game. The sequel has all the tricks of the first film without the weight of fundamentals like story, character development and a general reason to be afraid. In short it’s a crappy black and white photocopy of the original printed on a dot matrix printer.